O’ Tacomio,
Serves beautiful tacos for
Me to stuff my face.
This post is a bit old school.  I ended up visiting Tacomio 4 times since their opening.
My first visit was their second day of existence and I simply wanted to see if it was worth my time to re-visit a few weeks later for a proper review.  Call it a scouting mission.  I saw potential and waited for the shop to adjust and sort itself out.
One my first visit, the tacos were under seasoned.  However when I returned three weeks later, Tacomio had adjusted and tweaked their menu.  They upped the seasoning and the tacos improved greatly.  The menu on the website is obsolete.  I was disappointed they couldn’t re-work the Chicharron taco.  Guess braised pig rind (aka pig skin) is just too weird for most Vancouverites.
Tacomio features fillings that are stewed and for the most part deploy a single tortilla for its tacos. (I’m not getting into authenticity debate over that choice, as I heard both sides of the 2 versus 1 argument.)
The thing that convinced me to come back to this Crosstown/Gastown eatery was the flavour of the proteins in the fillings really stood up.  Whether it was chicken or pork, the flavour of the meat was at the forefront and full of umami.  If you like white cut or Hainanese chicken, there’s similar flavour concept going on at Tacomio. 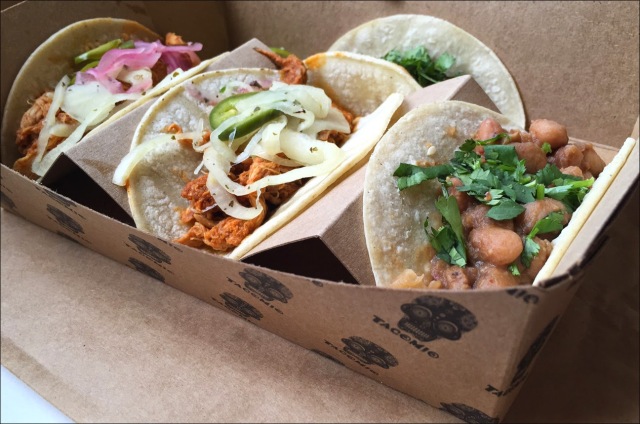 While the protein is the central component of the fillings’ taste, there are other subtle complimentary flavours, which make Tacomio’s taco interesting – at least to me.
Part of the reason why I ended up returning to this taco shop was that they don’t offer all 10 of their fillings every day.  Usually, only 5 – 6 options and a daily specials taco are available.  As much as I tried, I haven’t had every taco on the menu.
Here’s a rundown of the tacos I have tasted and what I thought. 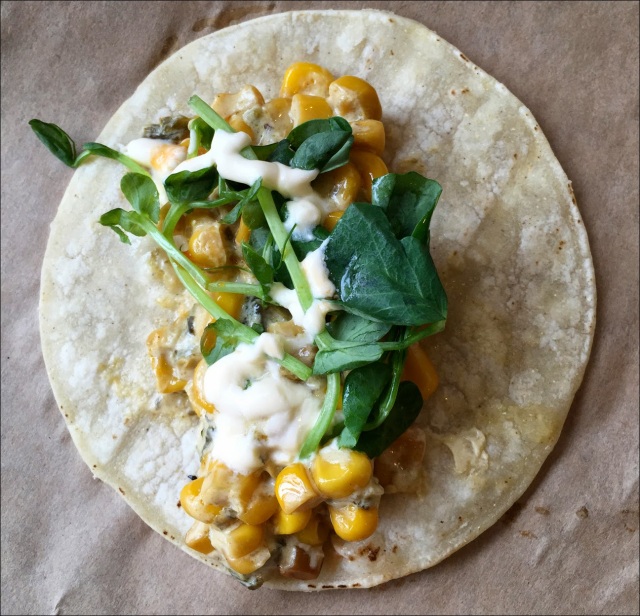 Rajas Con Crema (Roasted Poblano pepper & Creamed Corn):  The nib lets of corn really stand out; they are toothsome, sweet and bright.  The filling is not too rich.  Although I really couldn’t taste the Poblano pepper, overall I liked this filling. 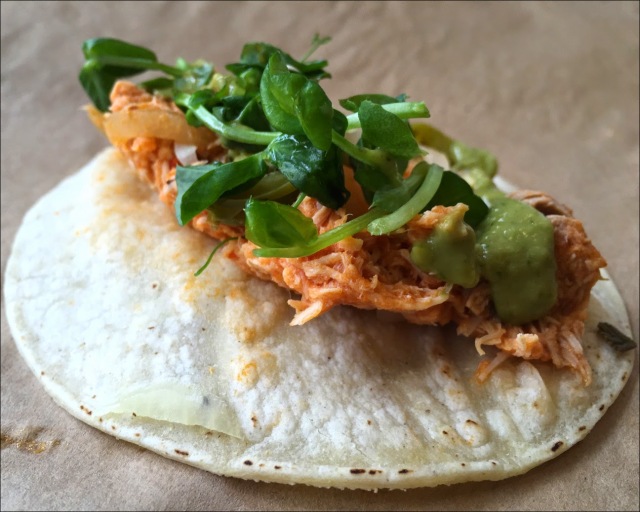 Tinga De Pollo (Roasted Chicken, Chipotle sauce, Pea Shoots, Onions & Avocado Lime Puree): The white meat chicken was moist.  The smoky chipotle sauce was present but took a back seat to chicken flavour.  The green puree and pickled onions added creaminess and tang to help round out the flavours for the taco.  Even the pea shoots add itself own flavour to the taco.  The Tinga de pollo filling had the most complex flavour of all the fillings – tasty! 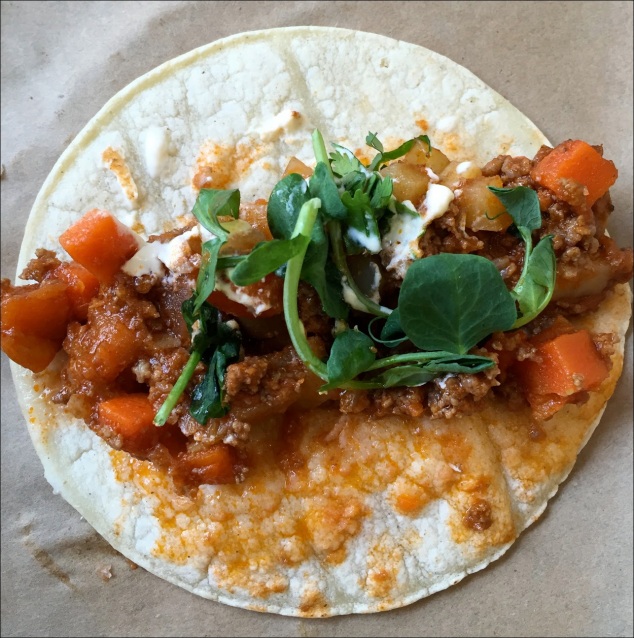 Picadillo de Carne (Ground Beef stewed with Carrots, Potatoes, Onions, Tomatoes, Pea Shoots, & Sour Cream):  This is the only regular beef filling on the menu.  It was the one filling I wasn’t too enamored with as I thought it was under seasoned.  Unlike the other meat fillings, there wasn’t a strong beefy taste, which surprised me. 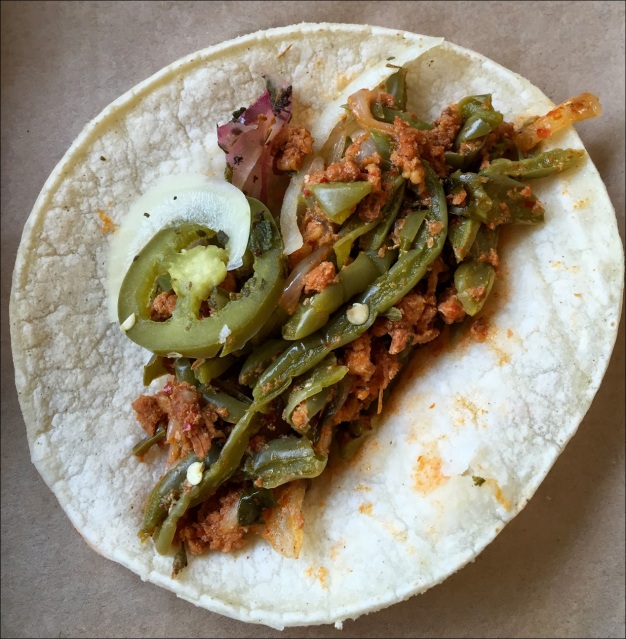 Nopalitos Con Chorizo (Fresh Cactus with Chorizo, Jalapeño, and Onions): This is my favourite taco filling at Tacomio simply because I liked the texture of the strips of fresh cactus.  The fresh cactus reminds of okra in terms of texture and taste but without the slime.  As a result the well-seasoned chorizo really drives the taste of this taco. 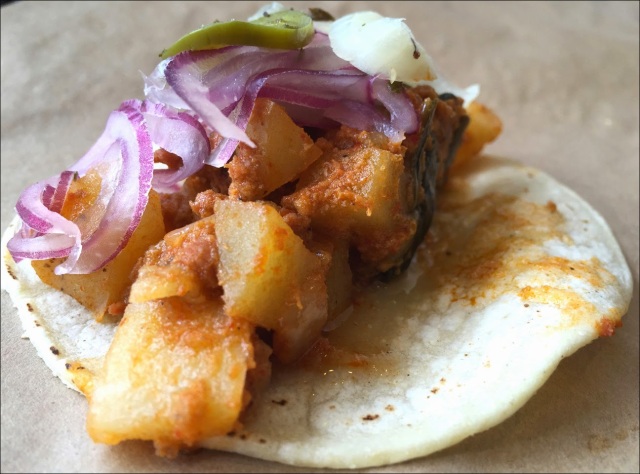 Papas Con Chorizo (Potatoes with Chorizo, Jalapeño, and Onions):  This is a simple taco consisting of earthy potatoes and spicy chorizo.  There were enjoyable contrasting textures between the soft potatoes and crunchy onions.  However flavour wise, I thought this taco was a bit boring and meh. 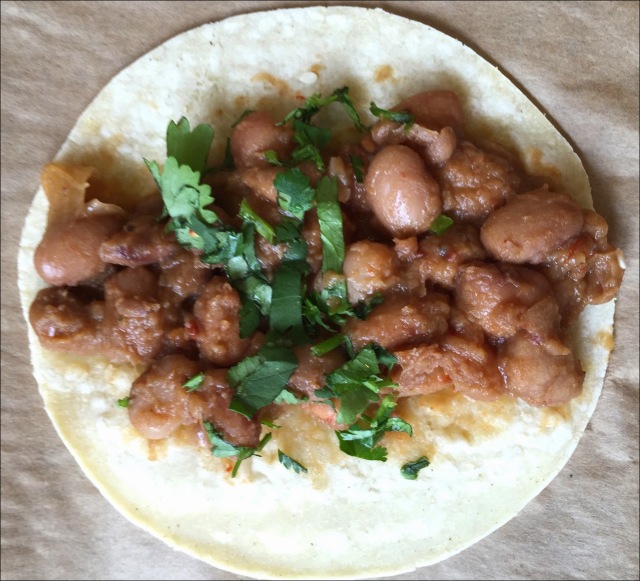 Frijolitos (Pinto Beans & Cilantro):  The bean filling wasn’t mushy.  There was still some texture to this filling due to the presence of whole beans.  This taco was the most aggressively salted filling out of the choices I tried but still very enjoyable. 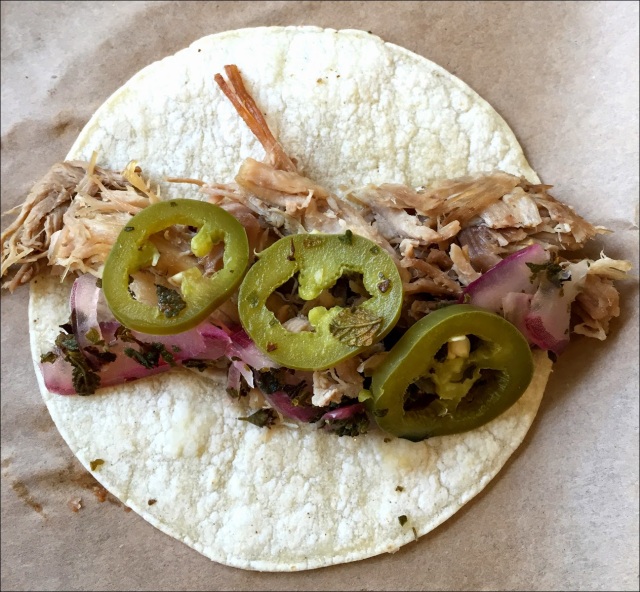 Carnitas (Confit Pork with Pickled Jalapenos & Red Onions):  The pork was a bit dry but it had a very nice sweet porky flavour.  Herbs were added to the pork to increase the flavour of the filling.  The Jalapenos and onions added a nice crunch, spiciness and tartness to the taco. 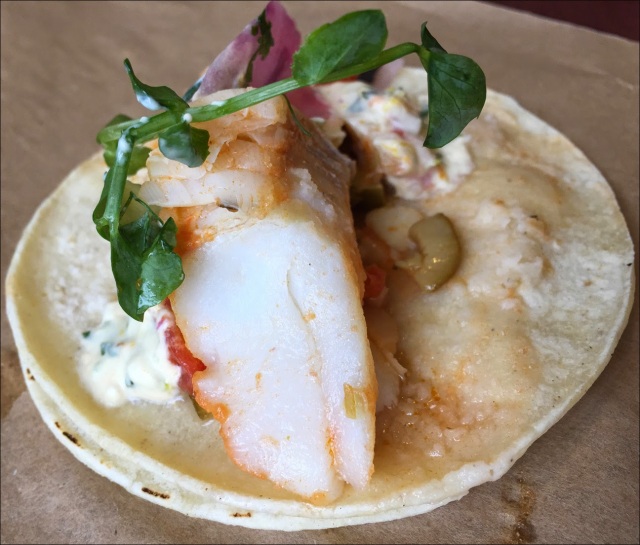 Special Fish Tacos (Baked white fish with onions & olives): Vancouver loves fish tacos.  I really liked this special and hope it makes it to the main menu.  The large chunks of white fish were juicy and seasoned well.  There was orange citrus flavour, which made the filling more delicious.  This was the only taco where Tacomio doubled up the tortilla.  I think it was because the filling was really saucy.
It was easy for me to visit as often as I did because of the proximity of my office.  However, La Taqueria is even closer to my work.  With the two shops being just 3 blocks apart the comparisons will be unavoidable.
From my perspective, Tacomio’s fillings have a more sophisticated flavour profile.  I often found myself forgoing the extra freebie condiments (salsa with various heat levels & pickled veggies) that Tacomio offered.  I liked most of the fillings as is; they were moist and tasty. 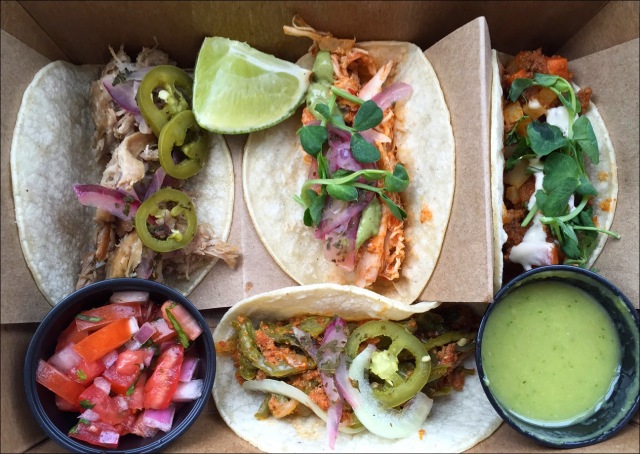 As much as I was trying to be thorough with the multiple visits, I found myself looking forward to each trip.  I didn’t love every taco options, but there are a few that really standout, such as the Nopalitos, and are very enjoyable.   As a result, Tacomio is officially in my lunch rotation.