Tale of two Wontons –
One Delicious, One Awful
At Double Double
I think this is the first time in my wonton saga where I had two kinds of wontons in one meal.  After my first visit to Double Double last year, which you can read here on Dennis the Foodie’s blog, I wanted to come back to further investigate the wonton noodle soup.
Speedy came with so I could eat more food and get a better read on Double Double.  First up, we have the wonton noodle soup.
Normally I would ask for veggies (for an extra charge) to be added to my soup noodles, however at Double Double veggies are free and part of the dish.  Unfortunately, this was the only positive for the Double Double’s wonton noodle soup.  The broth had notes of umami but was on the blander side.  The noodles were unremarkable and a bit soft. 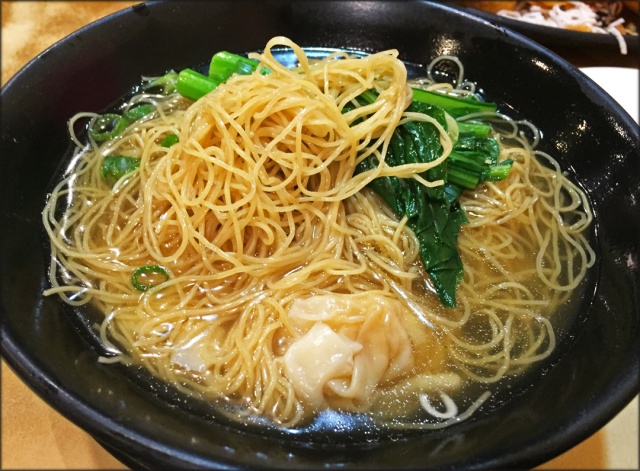 The weakest and most disappointing component was the wontons themselves.  The filling consisted of loosely packed small flavourless shrimps. I honestly believe the water in which the wontons were boiled in, seeped in, diluted the seasoning, and broke apart the filling.  Compounding the problem, the dumplings were also overcooked, leaving the wrapper extremely mushy.
Weirdly when dunked in hot oil, the wontons were fantastic.  In comparison to most deep fried wontons, Double Double’s golden yellow crunchy dumplings were huge.

The compact shrimp filling was ample, seasoned well and had a nice bouncy bite to it.  The restaurant was not stingy either, as the order came with at least 8 large wontons.  It’s remarkable how good these deep fried wontons were, when the traditional ones were so awful.  Double Double deep fried wontons are a must order.
The rice rolls were also prepared very well.  The rice roll on both the beef and Chinese donut dishes were soft and smooth.

The beef in the Beef & Enoki Mushrooms Rice Rolls, had crunchy and sweet water chestnuts and citrus-y dried orange peel.  The filling was well seasoned.  The only thing I didn’t get was the enoki mushrooms which didn’t add any flavour and had a jarring chewy texture.  Next time I would just order the plain beef rice rolls.

The Chinese Donut rice roll was made with a fresh youtiao out of the deep fryer.  It was crisp on the outside, with slight chewiness but mostly soft.  The sweet soy sauce that was poured over the rice roll was unique.  It was spiked with a fragrant aromatic fried shallots flavour.  This totally made this dish much better.  Weirdly I didn’t taste the same shallot enhancement in the soy used for the beef mushroom roll.
The Fook Chow fried rice was solid and prepared well.  The topping was loaded with plenty of chunks and morsels of chicken, scallops, squid, shrimps, shitake mushrooms and gai lan stalk.

To be quite honest, I like Fook Chow fried rice because it’s essentially umami rich Chinese gravy on rice.  Double Double’s version used good ingredients, had a good gravy to rice ratio, and as a result it tasted good.
As much as my Cantonese is usually on point, sometimes mishaps happen.  When our server described the special daily vegetable dish, I totally misunderstood it and assumed I ordered leafy greens.  Instead, a plate of stirred fried cauliflower, garlic stems and Chinese sausage arrived.

This was unexpected but a pleasant surprise, as both Speedy and I love garlic stems.  The veggies were not over cooked and still had a nice crispness to them.  This is something my mom would prepare for dinner.  I just found it a little unusual for an eatery’s daily special.
With the exception of the wonton noodle soup, my meal was enjoyable.  This restaurant also has some Chiu Chow dishes on their menu that were tasty when I tried on my first visit.  While the traditional wontons were not good, the deep fried wontons were amazing, so at least there’s a wonton worth getting at Double Double.
Double Double Restaurant
Suite #128 – 4600 No. 3 Road
Richmond, BC
604 370 3345
https://www.facebook.com/Double-Double-Restaurant-133427006801245/
VERY VERY WTF SIDE NOTE: When I Googled, “cauliflower in Cantonese”, the first website I clicked gave me the Chinese characters but also indicated that cauliflower may also be Cantonese slang for various STDs/STIs. WHAAAAT?!?! Really? Oh my, may not look at cauliflower the same ever again.