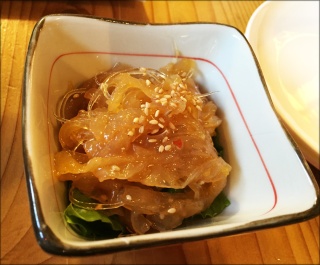 Little snacks that were
Meh. No Standout items tried
At Guu Kobachi
Guu is my preferred Izakaya chain in the city.  I have had great meals at the various locations.  As a result, I don’t call the Guus by their given name.  Like favourite teammates, I have nicknames for the various Guus and not the obvious ones that hockey players give by adding “er” or “eees” to a name or a by simply shortening a name.  For my Guu roster, there’s OG, Zen, Date, Burbs and Cazz.
I don’t have a pet name for Guu Kobachi since I’m not familiar enough to bestow one for it.  I have not been back since they first opened and unfortunately I had a fairly underwhelming meal recently.
Kobachi is Japanese for small bowls.  In the context of this Guu, it means they serve a lot of nibbles and small bites meant to go perfectly with beer & sake.  We began with some offal and unusual snacks: deep fried chicken gizzards,  jellyfish salad, and grilled beef tongue.
Given the tiny ceramics used and priced charged, I wasn’t expecting a huge portion for each order.  However I was a little surprised they use lettuce to prop up the servings so that it look like you got a lot of food.  This happened for the chicken gizzard and jellyfish.

I love the naturally crunchy texture of chicken gizzards.  Unfortunately the pieces of the offal Guu Kobachi used were chopped into small pieces and thus they managed to over fry them, ruining the texture. Some of the pieces were similar to jerky. The dish was also greasy.

The jellyfish salad was fortified with shark fin and marinated with a sweet sesame oil based dressing.  Aromatic and savoury, this petite salad was tasty but I wish it more than 3 bites.

The beef tongue was my favourite out of the first three dishes we got.  It was simple, beefy and juicy.
The next round of items we ordered were larger and pricier.  We got 3 types of sashimi, and two daily specials.
Originally we chose king salmon, scallops and uni but when the platter arrived, it came with additional slices of Hamachi and an apology for the delay.  The fatty hamachi was the best raw seafood out of our selection.

I thought the scallop, king salmon and uni were on the bland side.  The sea urchin also had unpleasant bitter after taste.

That harsh flavour returned in our first daily special: Uni Carbonara Udon.  Thankfully, there wasn’t a lot of uni in the dish which consisted mostly of a creamy, fake cheesy white sauce.  The udon was unique as it was wide and flat like Chinese Flat Rice Noodles (the one you stir fry with beef).  The carby strands were soft but not mushy.  My dining companion didn’t like it and I was indifferent to it. 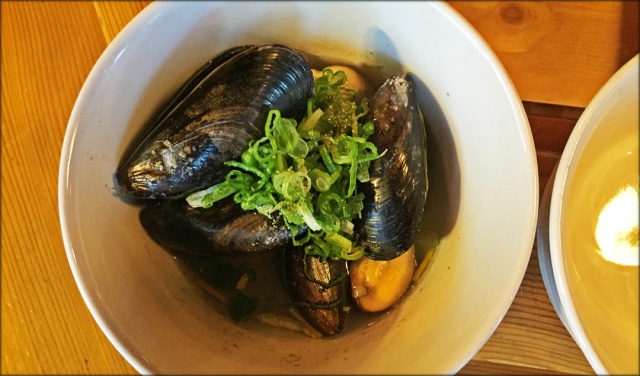 Our last dish was the steamed mussels and it was another disappointment.  The bivalves were flavourless.  The broth was light and also weak on taste in comparison to the same dish I’ve order at other Guu locations.
Overall this was the poorest experience I have had within the Guu chain.  The meal had too many duds and no stand out, wow items.  I think the Zen location is still my favourite and until I have a better experience at Guu Kobachi, it shall remain nickname less.
Kitanoya Guu Kobachi
735 Denman Street
Vancouver, BC V6G 2L6
604 683 0735
http://guu-izakaya.com/kobachi