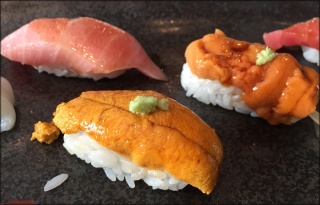 Sushi Maumi,
Rare Nigiri Served Quickly
Got to Catch them all.
For all the sushi shops in the city, all are decidedly localized even if they are serving expertly prepared traditional nigiri.  The obvious difference between a sushi restaurant in Japan versus one in Vancouver is the type of seafood used; with most YVR eateries opting to offer sustainable local varieties like albacore tuna, salmon and uni harvested just off BC’s spectacular coastline.
What’s more subtle is the speed that sushi is served.  In North America, the more one pays for food, the more time one expects to get to enjoy their edibles.  That’s not always the case with sushi in Japan.  A high end sushi-ya is not an izakaya where you can linger and talk with your friends; one is expected to eat and get the f$#%$k out.
Here high end Japanese restaurants like Tojo’s, Miku, and Octopus Garden serve their omakase at a slower tempo in comparison to their Japanese counterparts to be more in tune with Vancouverites’ expectations.  In contrast, customers of three Michelin star Sukiyabashi Jiro of “Jiro Dreams of Sushi” fame, are in and out in 30 minutes.
Outside of traveling to the land of the rising sun, I never expected to experience this type of accelerated dining or the legendary Maguro O-Toro, so prized in Japanese sushi in Vancouver.  That is until I saw a tweet from Vancouver Magazine restaurant award judge, Fernando Medrano who shared the menu of Sushi Bar Maumi in the West End.  There printed on their regular menu, like rare Pokemons, were the famous O-Toro, Chu-Toro and Bafun Uni.

Despite the bank breaking prices, I was prepared to capture my food version of Zapdos, Moltres and Articuno.  Joining me for this mission was Dennis the Foodie, who has already posted his personal account of our dinner, which you can read here. 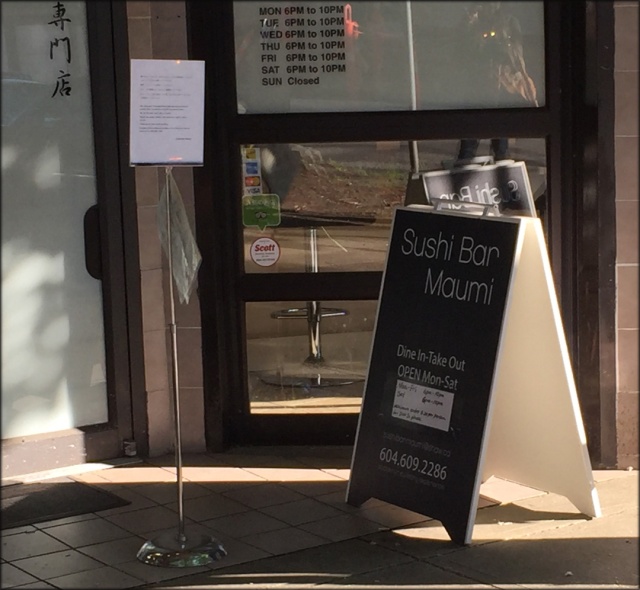 In an attempt to acclimatize Vancouverites to the Japanese way of serving sushi, Sushi Bar Maumi has lots of rules, which they post outside their door and on their Facebook page.  They primarily serve fish from Japan and have 5 key rules:
At the ten seat counter, all the preparation for every food item ordered can be observed.  I chose:
In the nook of the crescent shape counter, the itamae’s work station was organized and designed to minimize movement while maximizing output.  Everything was neatly laid out, allowing the chef, like an automated machine, to expertly prepare the fish, form the whole firm seasoned grains of rice into oblong bullets by simply cupping his hands 2 to 3 times, sauce and dress the fish, and place the finished product onto my large ceramic plate in less than a minute.
The speed was awe inspiring and disorienting given how beautiful and luminous the piece of nigiri looked as it was presented and described.  As per Japanese decorum, one is to eat the nigiri as soon as it is served.  For the first few pieces, I followed the allegro tempo; tick – the nigiri was placed onto my plate, tock – the item was in my mouth.
As this was happening, I felt like I was sucked into a vacuum where only the chef, the food and I existed.  I was mesmerized by my omakase meal as it unfolded.  As much as Dennis was there next to me, he might as well been in a faraway land, like Johto, on his own adventure.  I felt like I lost track of him.
Eventually my Slowpoke eating habits and blogging protocol took hold.   I returned to reality and the nigiri, including my special orders, began to populate my plate.  It was a beautiful sight.

As much as I knew what I was getting into, I was still overwhelmed with the pace.  The rapid fire dining at Sushi Bar Maumi is not conducive to photo and note taking.  For the first portion of my meal, I created only faint and fleeting impressions of the fish served, instead of a detailed survey.
The Big Eye Tuna (Mebachi) was soft and sweetened by the soy that was brushed on the fish. GO! GO! GO!

The salted cuttlefish (Sumi Ika) was surprisingly not slimy like squid but firm and almost crunchy. NEXT! 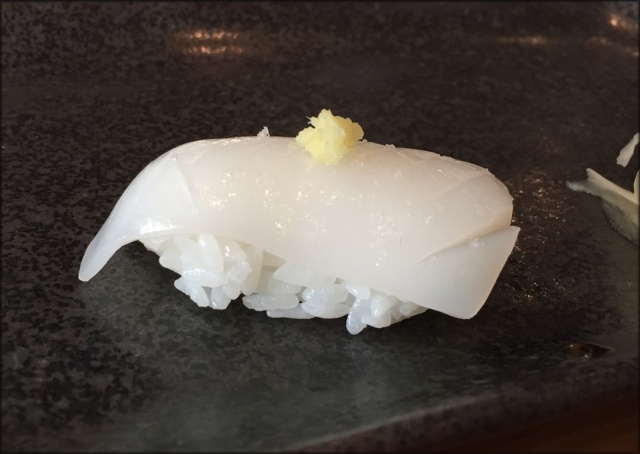 At first I thought I was being served chicken when the chef presented this nigiri.  However it was Chicken Grunt (Isaki). This pinkish fish had a slight oiliness. NO TIME, A WILD NEEDLEFISH APPEARS!

Also known as Half Beat Beak (Sayori), the Needlefish was very pretty with its shimmering silver streak of skin and had a light taste.  I though ginger and green onion garnishes were a bit overwhelming. GO! 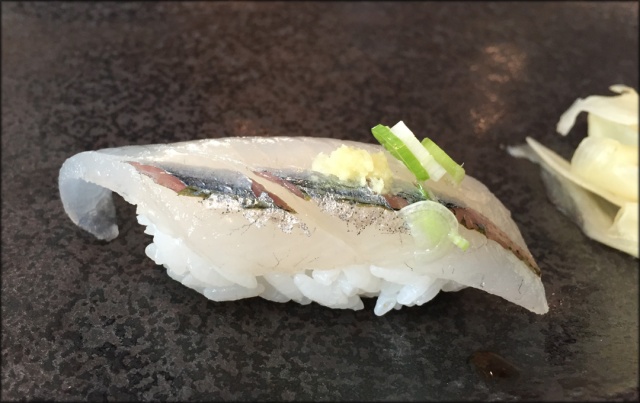 The Razor Clam (Taira Gai) was the one piece in the flurry of rice and fish that made a big impact.  The meat was so cleanly sweet which was further amped up with salt. WOW! NEXT! 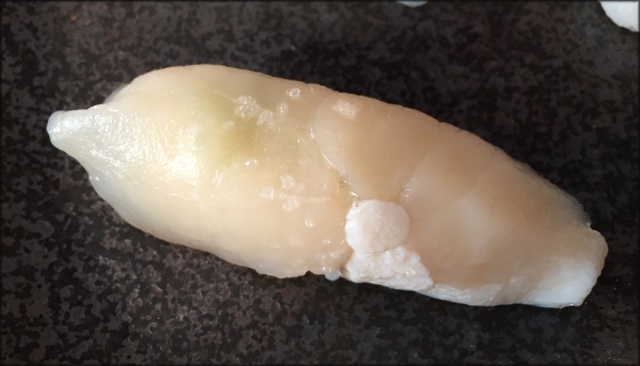 This is the Striped Jack (Shima Aji).  It’s a prized fish in Japan but I honestly cannot remember what this tasted like or felt like. 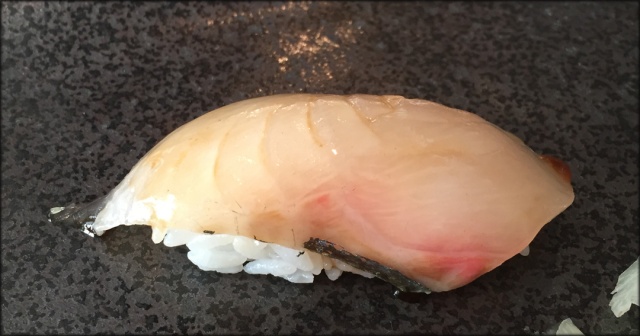 This is where I made a conscious decision to slow down, and savour the remaining parts of my meal; manners be damned.

The Horse Mackerel (Seki Aji) as expected was very oily.  Unlike the Sayori, the ginger and rings of scallion were necessary to cut the richness of the fish. 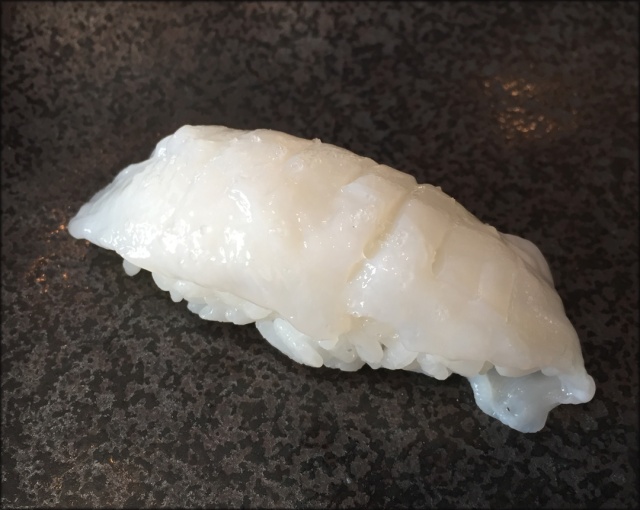 The fresh salted Octillery Octopus (Nama Tako) was my least favourite offering.  It was very chewy and despite the salt, bland.

The last piece of the omakase set was the salt water eel (Anago).  It was sauced like the common Unagi (fresh water eel) but the Anago had a cleaner taste in comparison.  The ocean/sea eel was similar to a light white fish. 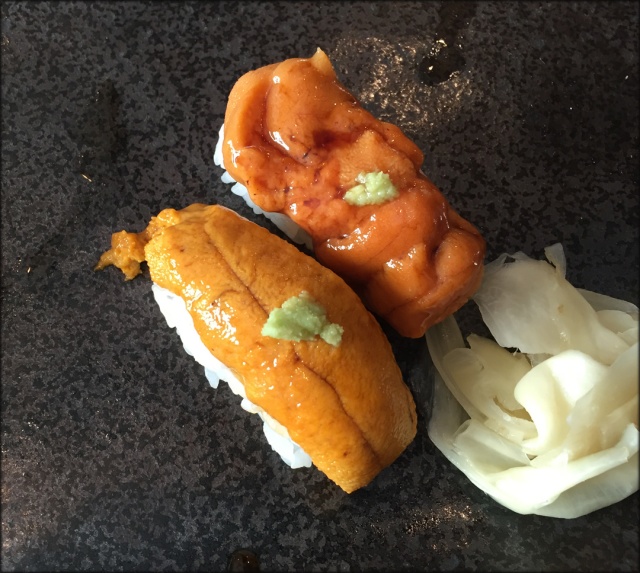 In a fortunate turn of events, I got local uni as part of my chef’s choice set, allowing me to compare it to my order of Bafun uni.
The local uni came in a whole fat sliver, glazed, and topped with a touch of wasbi for a contrasting flavour.  It was sweet, creamy, firm (needed a few chews to break it down) with a slight astringent after taste. 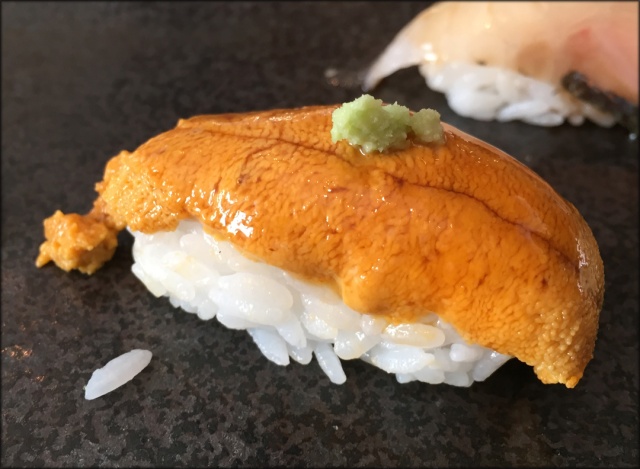 In my opinion even the best local uni, which was served to me at Sushi Bar Maumi, has a slight bitterness that constrains its lusciousness.
In contrast, the richness and sweetness of the Bafun uni, which feeds on kombu and is found in Muk free waters off Hokkaido, is out in full force without any impediments. Unlike the local uni, the itamae placed 3 small smooth pieces of uni imported from Japan.

I have a feeling I may not have gotten the top grade Bafun uni since it did not come in large singular pieces like the local stuff.  However, it was still boldly sweet and rich.  The Bafun uni simply melted in your mouth with no chewing and coated every grain of rice.  It was such a wonderful eye opening experience and a foreshadowing of what to come with my Blue Fin tuna.

Placed side by side, the different cuts of Maguro look like a Pantone guide for the various tints of red.  As the piece contained more fat, the more pink it looked. 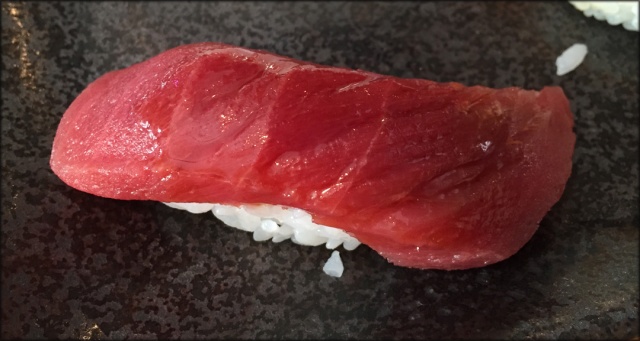 The dark red piece was the flesh part of the Blue Fin tuna (Hon Maguro Akami) It was meaty, yet soft and sweet.  As expected it required the most amount of chewing. 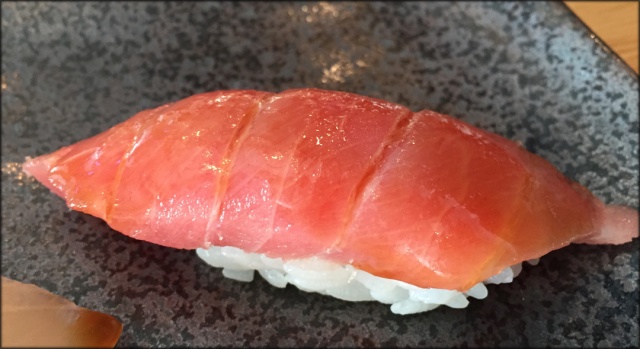 The medium fatty piece of Maguro is the section of fish between the muscular top of the fish and extremely fatty bottom belly.  The Hon Maguro Chu-Toro required a few chews (not as much as the Akami though) releasing the tuna’s fatty goodness.
Finally I was only left with the revered Maguro O-Toro. Due to the high fat content, the marbled tuna belly was pale pink.  This piece of fish behaved like butter.  Without disturbing it, the warmth of your mouth just melted the O-Toro.  The fish butter just soaked all the rice in oiliness much like the Bafun uni.

However the maguro belly was much heavier and decadent, as there was no other flavour to cut the richness.  This was something I have never experience before. It took a lot of restraint on my part to not grab Dennis and scream, “You need to have the O-toro and Bafun Uni now!”
When I finished my last piece of nigiri only 40 minutes had elapsed.  Since I had the time, I figured I might as well order a miso soup to warm my belly and finish off my meal.  I was surprised, but shouldn’t have been given the experience thus far, the waitress fired up the gas stove and hand prepared my soup.

The Ara Miso Soup had pieces of charred fish bones, which lent its flavour to the hot liquid.  It was light and not just salty.  I detected a sweetness and beaniness of the miso paste.  This was a soothing and slow way to end my meal.
This wonderful dinner did have some minor flaws. For the most part, the expertly prepared rice for the nigiri was compacted firmly enough to hold its form but disintegrate easily with a chew or two.  However I did get a few pieces where there were some loose grains and the nigiri platform was shaped so loosely I had difficulty picking up the pieces.
Lastly, it may seem silly for me to make all the Pokemon references in this post, but there are a lot of parallels between becoming a Pokemon master and an expert in your chosen field of interest.  There’s a lot of repetition, meeting others that share the same passion and going to different places to gain new experiences and knowledge on the path of becoming an expert foodie/elite Pokemon trainer.
The one thing I wish I could import from the video game that features Pikachu is the ability to catch and release without doing harm.  Unfortunately, my meal decisions have impacts on the environment and the bio diversity of this world.  The Blue Fin tuna is very endangered and one Maguro has a real chance of becoming like Zapdos, Moltres or Articuno, the last of its kind.
Despite these real concerns, I would definitely like to return to Sushi Bar Maumi but without a camera to enjoy the food more and would select different types of seafood.  This visit was the most unique sushi meal I have had in Vancouver.  I felt I got a privileged peak into what it would be like to dine at a high quality sushi shop in Japan without stepping onto a plane.
Sushi Bar Maumi
1226 Bute Street
Vancouver, BC
604 609 2286 (Reservations are a must here)
http://www.facebook.com/sushibarmaumi
https://www.instagram.com/sushi_bar_maumi/
PS: Did you know that the Pokemon Franchise turns 20 this year? Also Nintendo did not sponsor this post.
PPS: In a weird bit of kismet, Alex Gill also reviewed Sushi Bar Maumi this week.
I repeat reservations are now a must.