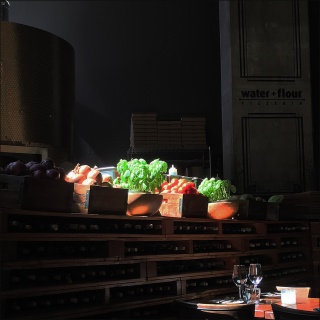 The old Subeez space has been transformed into a more open, light filled, and conventional looking restaurant, albeit with an identity issue.
My colleague runs by the new eatery called, Per Se Social Corner/Water & Flour/Rosalinda/Illy Café on her way to the office each morning.  Needing a place for a staff lunch, she suggested checking it out.
I had read about the restaurant but had no real interest in visiting.  Honestly if you can order from the entire menu from where ever you are seated, then why not just use one name for the entire restaurant for more effective branding?
As a result, I was leaning towards the “they don’t have there their shit together” line of thinking.  Especially when the owners (or their marketing team) thought it was a good idea to combine two words, tapas and appetizers, which almost mean the same thing into a new word.
I guess they hoped to create something buzzy but I couldn’t help rolling my eyes at the word, “Tapatizers”.  All I have to ask is how did “friendtervention” work out for Sex and the City 2?
I was prepared for the worst but my lunch at the old Subeez space was a pleasant surprise, in that it was tasty for the most part.  However beware of the tight booths and awkward to get into picnic benches – they look nice but are not as comfortable as one would like.

We covered a good cross section of the menu, ordering the risotto balls, octopus, beef carpaccio, a green salad, three pizzas, and to finish the meal, 3 types of cannoli.

The Arancini di Palermo consisted of 3 non greasy golden rice balls and marinara sauce.  The menu listed tiger prawns, but I’m not sure if the few bits of shrimp/prawn the size of the grains of rice within the Risotto ball were them?

Overall the dish tasted fine, with the Arancini working well with the tangy tomato sauce but nothing to get to excited over.

The Pulpo a la Gallega was my favourite dish of the afternoon.  The octopus was very tender and flavourful.  I also like the slight charred taste the slices of potatoes had.  This dish was simple but well executed.

The Wagyu Beef Carpaccio was buttery when you could get the slice of beef off the plate.  Sliced tissue paper thin, the beef had to be scraped of the plate and whatever was left behind dried onto the plate by the end of meal.

Fortunately the kitchen was light handed on the balsamic vinegar and smoked mayo or else the condiments would have overwhelmed the beef.

The Insalata Verde Di Casa was a simple green salad with tomatoes and avocado.  It was fresh and I appreciated that it was not heavily dressed with the balsamic vinaigrette.
The list of available pizza ranged from traditional to modern fusion along the lines of adding Asian ingredients. The nonsense that surrounds “Tapatizers” rears its head again with some of the pizza names.  Why is the 5 cheese pizza called the Drunken Goat, and is pineapple and coconut milk synonymous with Malibu?

The three pizzas we ordered were the Funghi, Drunken Goat and the Cinque Cento (also not sure why this pizza is called 500 in Italian either).  Despite the oblong shape, the pizza is similar to the foldable New York thin crust pie.

The Funghi was a simple mushroom pizza and tasted fine.  The crust of the oblong pizza was crisp, chewy and had some leoparding.

The aforementioned Drunken Goat was a 5 cheese pizza consisting of goat cheese, fior di latte, parmigiano, feta and gorgonzola. I could taste the gorgonzola the most out of the five cheeses on the pie.  As one could expect it was the greasiest of the 3 pizzas.

The 500 Pizza had the most toppings and was the most expensive pizza.  Containing pesto, goat cheese, mozzarella, sundried tomatoes, mushrooms and shrimp, this fully loaded pizza was delicious.  I like how the shrimp was placed on after the pizza had baked.  As a result the seafood was still plump and had a nice snappy texture.

Although nothing was wrong with the pizzas, I felt they were overpriced even by downtown standards.  I think I would rather walk a block north to Straight Out of Brooklyn and purchase a whole pie for the same quality, but is slightly cheaper and larger.

To finish of our meal sweetly, we order 3 kinds of cannoli: pistachio (middle), vanilla lemon (right) and chocolate (left).  The pastry was very flaky.  The fillings were creamy and prepared well.  Out of the three, I liked the aromatic citrus-y lemon vanilla cannoli.
Personally I feel like this eatery in the old Subeez space seems more interested in marketing than ensuring patrons have a comfortable and filling meal.
Other than the standout octopus dish, most of the dishes were solid in terms of flavour but not spectacular.  I was disappointed with the wafer thin beef Carpaccio, missing in action tiger prawns, and the size of the pizzas.  As a result I feel the eatery is not delivering on value for the prices charged.
Removing the drinks, our bill totaled $150 (tip included).  I can think of lots of Downtown eateries where our group would have gotten a quality and more substantial amount of food for $37.50 per person.
Per Se Social Corner/Water & Flour/Rosalinda/Illy Café
891 Homer Street
Vancouver, BC V6B 2W2
604 428 6111
https://www.facebook.com/persesocialcorner/
http://persesocialcorner.com