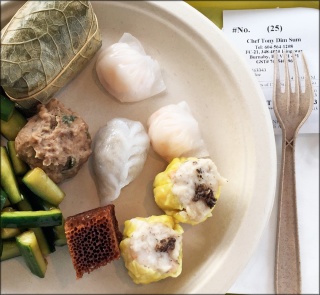 Eats Out of Context
Chef Tony at Metrotown
It felt very weird
The room was filled with voices gossiping, people catching up, and mothers chastising their young children to sit down and eat.  As I stared at my dim sum, I wonder what I had gotten myself into.
Richmond’s Chef Tony’s new endeavor is a food court stall at Canada’s second largest mall.  Their eight piece combo enable to me to try the restaurant’s beloved dim sum offerings.
Ironically, my seat at the Metrotown food court, by the large windows overlooking the Sears surface parking lot, was in the same spot a proper dim sum restaurant use to be 20 years ago.
The food itself was fairly good given the format. 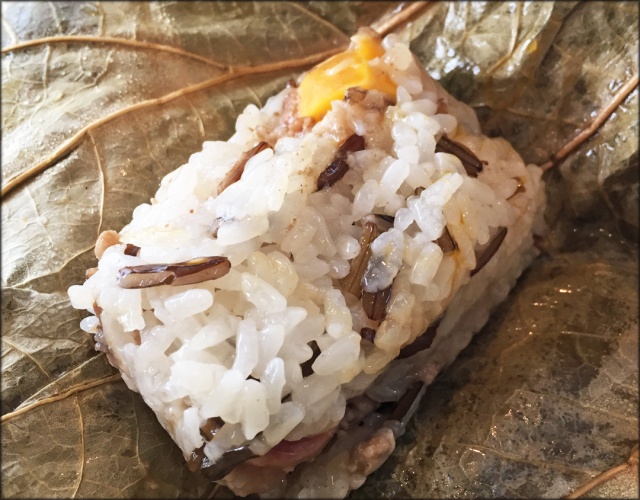 The aromatic sticky rice was speckled with wild rice, had seasoned minced meat, a sliver of salted yolk, and a slice of Chinese sausage.  This was very tasty and reflected the Chef Tony brand well.
The beef ball had the right bouncy texture and the requisite hints of dried orange peel, and meaty flavour.

The honey comb brown sugar cake was sweetened in line with Asian palates, which I approve since I don’t have a massive sweet tooth.  However I like the bouncy bubbly texture of the cake the most since one of my favourite Chinese bakery items is white sugar cake.
The fillings of the dumplings were on point in terms of texture, density, and taste.

I could taste the truffles (or truffle oil) in the sui mai which had a nice smoothness.
The leaf shape mushroom morsel had an intense fungi profile but I’m sure if I tasted the Matsutake in the mixture.
I appreciate the sharp sweetness of the Har Gow and liked it didn’t have any filler like bamboo shoots.
All the dim sum are steamed ahead of time and kept warm in large bamboo baskets, ready for a person to select.  This set up has its drawbacks in comparison to the regular dim sum experience.  The dim sum rapidly cooled down and I would have enjoyed the bites of food a bit warmer.
I also felt the skins of the more delicate Har Gow and Mushroom dumpling suffered.

The shrimp pieces had skins that were a bit too tough and as they felt dried out.  The mushroom skin was too mushy and lost the elasticity for a satisfying bite.
Also I would avoid the seasoned cucumbers, which I chose to complete my combo.  They were over marinated.  They may have caused my extreme thirstiness and slight MSG headache I experienced afterwards.
Although my plate of food looked good and was fairly tasty but for whatever reason, I wasn’t feeling it.  In fact, I had a strong sense of sadness as I sampled my food.
Perhaps it would have been different if I was with a friend. I simply came to the mall to quickly pick up a shirt for work.
Since I was a toddler, dim sum has always been a social event that often gathered generations together.  It was an occasion to linger, talk, and eat a communal meal with friends and family in the afternoon.
Essentially, yum cha is the antithesis of the food court experience at least for adults in my opinion.  For most grown-ups the mall is a place to run errands, and the food court only serves to quickly feed and move a person on to their next shopping need.
To have dim sum out of the familiar social context was jarring – I have never had Har Gow & Sui Mai by myself out.  I having nothing against the food serve by the Chef Tony but I’m not sure if I want to repeat this experience.
I missed the clattering of ceramic plates and cups, seeing grandmas and grandpas preside over their tables, and in general being surrounded by loved ones.  I think the food court experience doesn’t create the warmth I so associate with Dim Sum.
For those that are familiar with dim sum and the Chef Tony brand, and have the same experience growing up as I did, I wonder if this food court stall will have an appeal?
Or would it simply create an urge to call up one’s parents or friends to yum cha at a real restaurant, perhaps even Chef Tony in Richmond, like I did after I finished eating my combo?
Chef Tony Dim Sum
Metrotown Food Court
FC-21, 348-4820 Kingsway
Burnaby, BC V5H 4P1
604 564 1208
Website for their Richmond Location: http://cheftonycanada.com/en/