Much nostalgia,
So Tokyo, wow, Oishii
At old guard Miko

Tucked between the cavernous Hon’s (how are you still open?) and the line-up inducing Ramen Danbo on Robson street, is a restaurant that has been making sushi for over 25 years. I was surprised Miko had been open for that long when I read a “been serving you since 1991” sign in the ladies’ washroom. However some of the NHL players that have left autographs and platitudes on the eatery’s west wall have long since retired, thus confirming the longevity of the place.

Miko is always busy and getting in as a walk-in is tough. Until this recent miraculous walk in visit, I had many failed attempts to dine here.   As a result, years had elapsed since my last meal at this eatery and it had slipped off my “good downtown Japanese food” radar.

The sushi landscape in the city has changed dramatically since my last dining experience. More places are serving a diverse range of fish flown in from Japan.  The number of chefs skilfully prepping these airplane riding ingredients has gone up as well. In many ways, Miko seems stuck in the past in comparison to new restaurants such as Sushi Bar Maumi, Tetsu and Miku.

However, ignoring the hockey souvenirs, I did feel like I was sitting in one of the sushi places I had eaten at in Tokyo and Osaka. It’s the combination of the cheery Japanese music playing, the servers dressed in ornate robes/yukatas, and the well prepared traditional foods on Miko’s menu. Many of the items, raw and cooked, are common in Japan but not so much in YVR. 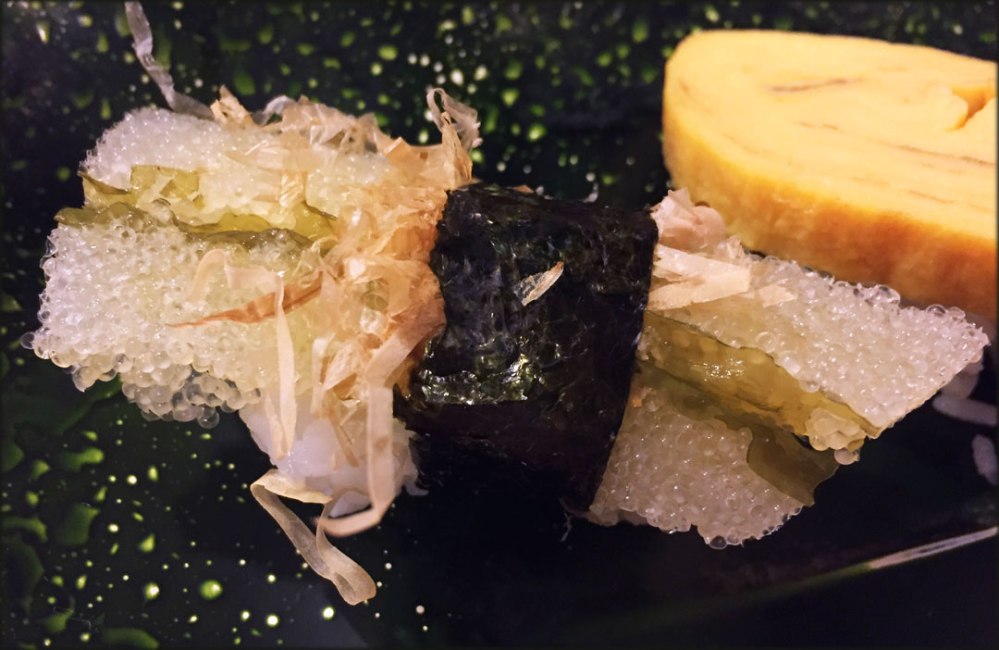 The first rare sighting was the Komochi Konbu nigiri. This was the first time I had seen it offered in Vancouver. The fish eggs on kelp tastes briny and umami. The slivers of bonito added a slight smokiness as well, but I feel this piece is more about the crunchy texture and roe popping chew. It’s not for everybody but serves as a glimpse of what different sushi ingredients are used in Japan. 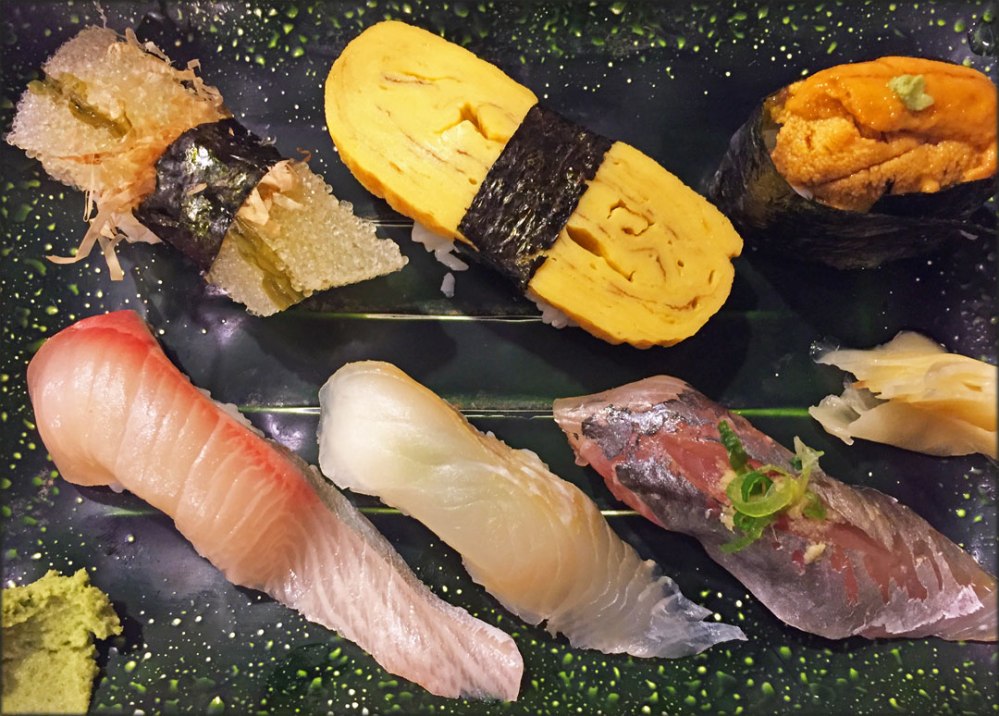 The nigiri menu overall is very affordable for the location of the restaurant and the quality you are getting. The most expensive piece of fish is $4. There’s no blue fin o-toro or aburi on the menu but there’s still a yummy assortment to choose from. To complete my nigiri set, I selected uni (Sea Urchin – Upper Right), aji (Horse Mackerel – Lower Right), hirame (Flounder – Lower Middle), homemade tamago (Upper Middle) and kanpachi toro (Amber Jack belly – Lower Left).

Well sized and formed, each piece was easy to pick up with chop sticks and chewable in one bite. The surprising in house made tamago had a pleasant savoury flavour rather than a sweet one.

All the seafood was fresh, with the creamy uni and buttery kanpachi toro being my favourites. 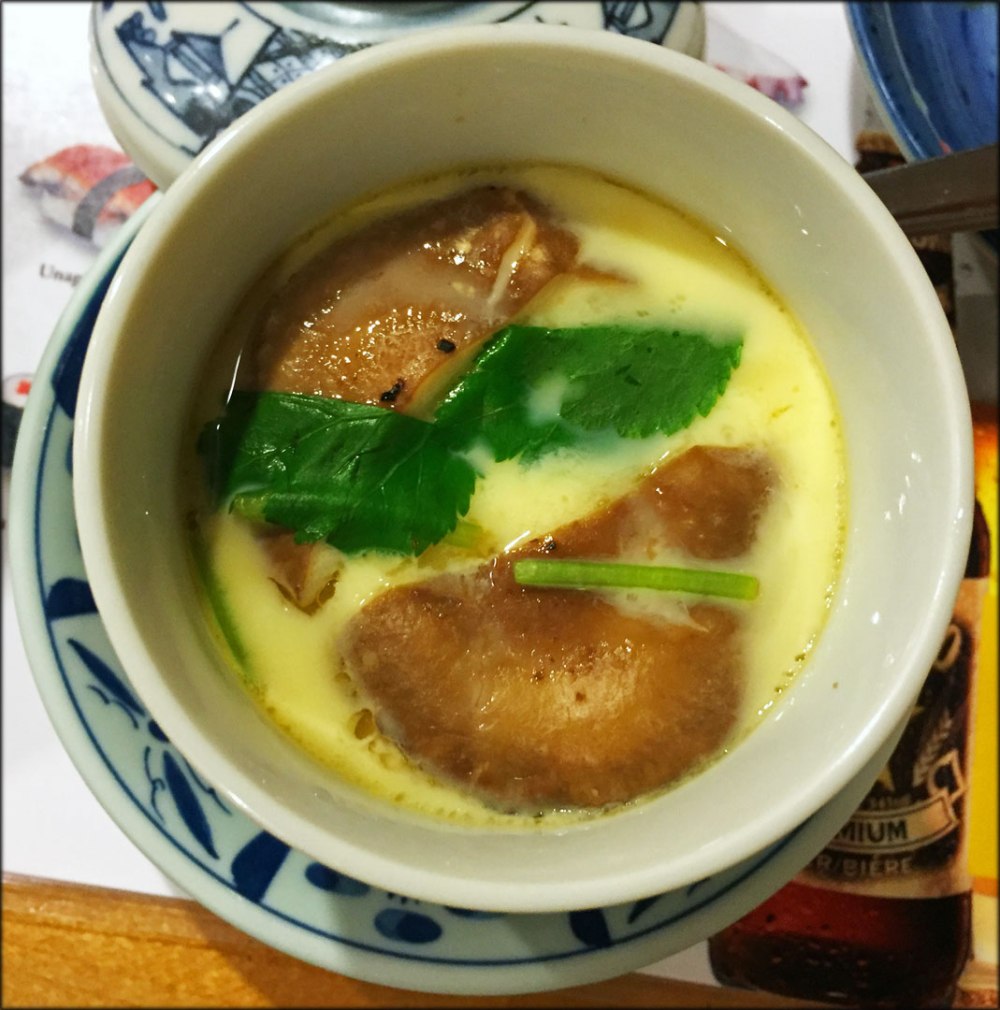 On the cook food side, the chawan mushi, another hard to find item in the city but ubiquitous in Japan, was silky, savoury and smooth. Embedded in the egg custard were bits of shiitake mushroom, chicken, prawn, fish cake and ginkgo nuts. I’m very happy to find an eatery that serves this comforting dish.

The clams steamed in sake was a simple but great tasty order. The bivalves were plump. The broth was light and concentrated with umami. To be honest, as long as the seafood is fresh, steaming shellfish with white wine or sake is always a good idea.

The yakitori was traditionally prepared with chunk of leeks/green onion stalks. Thankfully the sauce was more salty than cloyingly sweet. However it was lacking a charcoal flavour that would have taken these skewers to another level.

The tempura would be the only dish I would skip next time. I like the deep fried thick onion slices but overall the items were heavy. Nothing was greasy but the colouring looked too dark and it was lacking an airy crispiness that I would expect with a good tempura.

The food at Miko only evoked happy memories of my trips to Japan. The sushi is not top tier in the city but it certainly is good, and more gentle on the wallet in satisfying any craving for traditional sushi.

From my counter spot I saw the majority plates being expedited out of the sushi bar were filled with rolls, which is a shame. The real deliciousness and value at Miko are the nigiri and the traditional cooked foods. Remember to make a reservation if you are interested in checking this place out.